College is back – make it count! Now Leasing for Fall 2021

5 Tips For Living Next To A Noisy Neighbor

Living in an apartment community is, for the most part, great! In an apartment complex, there’s safety in numbers, plenty of new people to meet, and no shortage of friendly neighbors to borrow a cup of sugar from. However, some neighbors might sometimes behave as if they’ve forgotten they live alongside others. Whether it’s music being blasted late into the night, the heavy footfalls of someone upstairs completing a home workout routine, or a neighbors dog that won’t stop barking — there’s nothing that ruins a quiet night at home quite like a noisy next-door-neighbor. Of course, not every sound that leaks through a shared wall warrants immediate action — but when the noise is incessant and bothersome, it’s more than fair to speak up. Follow these tips from The Connection at Lawrence to, politely, deal with those noisy neighbors!

Looking for a new, quiet apartment community to call home? Contact us today to schedule a tour of our apartments near KU! 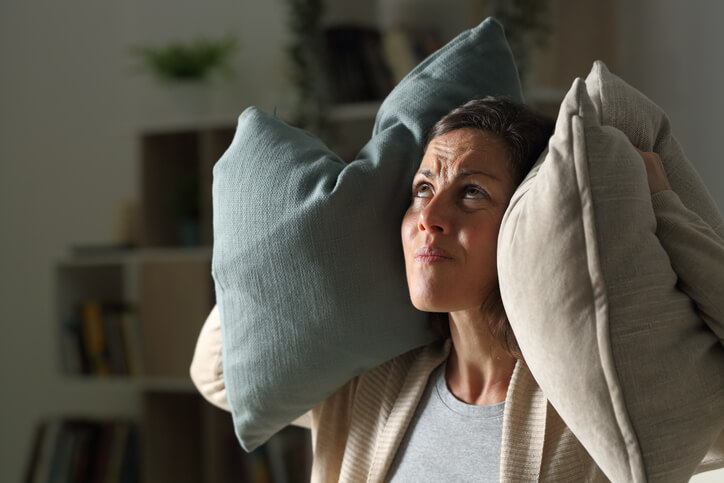 Give A Gentle Knock

Thanks to depictions in popular culture, many individuals’ initial reaction to a noisy upstairs neighbor is to grab a broom and bang on their ceiling. While this isn’t a terrible idea, there’s certainly a right way and wrong way to do it. The goal is simply to provide a kind reminder that people live beneath them and that they should be a little more considerate — for that, a few gentle knocks will suffice. Aggressively banging on the ceiling or shared wall is unnecessary and could come off as rude, which will only make things worse.

The best way to resolve conflict in any relationship, even between neighbors, is by talking face-to-face. Be honest, straightforward, and address specific concerns about the noise and how they might go about accommodating those concerns. Perhaps you could ask them to keep their music or TV at a lower volume past a particular time or ask them to workout later in the day, so the sounds of them jumping around upstairs don’t interrupt your sleep. If you’re kind and make it clear you’re willing to figure out a compromise that works for both parties, they’ll most likely oblige.

If talking face-to-face isn’t feasible or seems too daunting, leaving a nice note asking a neighbor to watch their noise levels is a decent alternative. When writing the message, adopt the same approach you would if speaking to them face-to-face. Be honest and direct. Notes tend to come across as passive-aggressive, so avoid writing anything that could be misconstrued as witty or snarky. Simply voice what concerns you have, how they might address them, and that’s it.

If a neighbor’s noise is relatively infrequent and only noticeable during reasonable times of day, but you’d still rather not hear it at all, then there are plenty of easy ways to soundproof your apartment. Rearrange furniture such as bookshelves to cover shared walls, use a white noise machine, or purchase some noise-canceling headphones to drown out midday noise with some tunes. Also, consider asking your landlord or property manager to let you move into a top-floor apartment; if there’s one open, they’ll likely allow it.

Once all other options have been exhausted, then it’s time to file a formal complaint with the landlord. However, before doing so, document the consistent occurrences of loud noise. The landlord will only take action if they believe the complaint is justified, so including details such as how often the noise takes place, what times, and how loud it is will help convince them this is a real issue. Also, inform the landlord of previous attempts to compromise with the neighbor. The landlord will then send them a letter requesting that they quiet down and may even fine them if a noise clause in their lease agreement permits them to do so. This option could lead to some tension between you and your neighbor, but if it results in some peace and quiet, it’ll be worth it.